Students and staff of Semmelweis University representing manual fields of medicine had the opportunity to get an insight into the operation of with da Vinci Xi, the latest surgical robot at a demonstration during a test day. At the event held at the 1st Department of Surgery and Interventional Gastroenterology, Dr. Béla Merkely, Rector, Dr. Attila Szijártó, Director of the Department and Harris Palaondas, Managing Director of company distributing the device, held presentations. The Rector announced that Semmelweis University will be the first in Hungary to launch a robotic surgery program in patient care and education. Not only patients, students and residents will benefit from the program, but it will also modernize and develop the Hungarian healthcare sector in terms of technology and science. 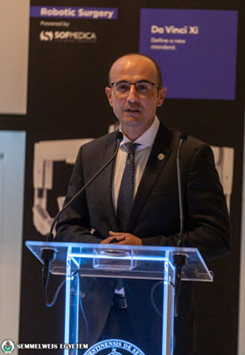 Minimally invasive surgery is of high standards in Hungary, both in Europe and globally. The next step is to move towards robot-assisted surgery, in which Semmelweis University will hopefully set an example by pioneering in this field”, emphasized Dr. Attila Szijártó.

Afterwards, Harris Palaondas, Managing Director of SOFMEDICA Life Saving Innovation, presented the company’s activities and the benefits of da Vinci Xi, the latest generation surgical robotic system. SOFMEDICA has been operating in four countries in Europe (Romania, Greece, Bulgaria, Cyprus) since 1994 and in Hungary since April 2021. So far, a total of 33 successful robot-assisted surgery programs have been developed in the region treating more than 1 million patients with the company’s robotic systems and training over 20,000 healthcare professionals to use them. The da Vinci surgical robotic system is used worldwide, more than 6,000 of them are currently in operation, and more than 1.2 million da Vinci surgeries were performed last year. As an example, he said that typically every operating room in the USA has its own da Vinci system, while in our region, hospitals have now started to acquire their second and third machines to go with their first system.

Harris Palaondas highlighted that robotic-assisted surgical systems allow surgeons to perform more precise surgeries, which has a number of advantages for patients, physicians and hospitals alike. He emphasized the improved 3D visualization capabilities and the enhanced version of of surgical instruments among the new developments realized in the da Vinci Xi system. He also added that the company constantly monitors the condition of the machines online, therefore they can tell if a part needs to be replaced and deliver it without any special request. He also mentioned that the company plans to introduce more and more new, innovative technologies in Hungary. da Vinci surgical robots are currently marketed in Hungary exclusively by SOFMEDICA Life Saving Innovation.

Check out the full article here.